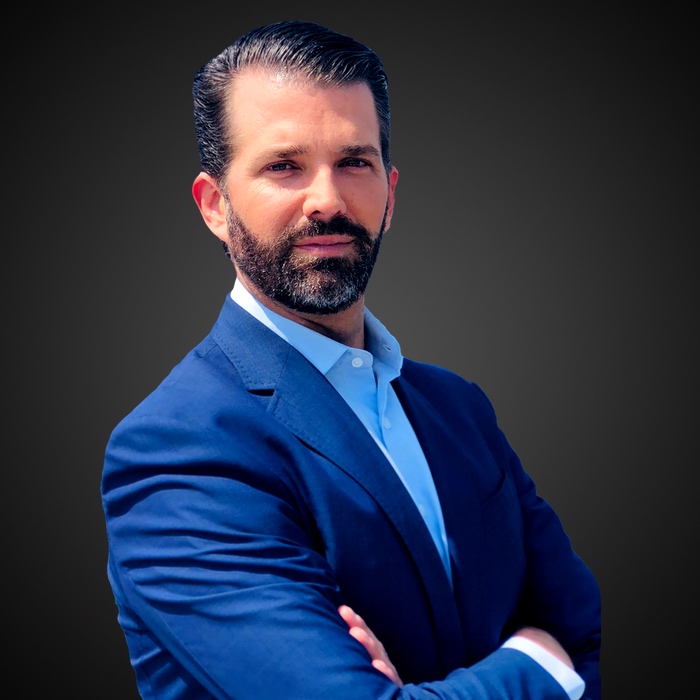 Donald J. Trump Jr. is an innovator and leader in today’s young business world. As an Executive Vice President at The Trump Organization, Donald Jr. works to expand the company’s real estate, retail, commercial, hotel and golf interests. His extensive real estate development experience, rigorous education and inherent business sense add a level of detail and depth to the management of all current and future Trump projects.

In addition to new project acquisitions, Donald Jr. actively oversees The Trump Organization’s extensive property portfolio. He is involved in all aspects of the company’s development, from deal evaluation, analysis and pre-development planning to construction, branding, marketing, operations, sales and leasing.

Upon joining the Trump Organization in 2001, Donald Jr. initially worked at Trump Place, the historic West Side Yards redevelopment in New York City, one of the most ambitious and successful large scale development projects in Manhattan. The project spanned several blocks, featured 17 buildings, and created a new community. From there he went on to lead the development of Trump Park Avenue, a conversion of the landmark Hotel Delmonico to an ultra-luxury residential condominium on Park Avenue at East 59th Street, which has been a tremendous success.

In 2003, Donald Jr. began overseeing the construction, financing and development of Trump International Hotel & Tower, Chicago, a 2.6 million square-foot property along the Chicago River, one of the tallest completed residential buildings in the world. The 92-story building includes 486 residential condominium units, 339 hotel condominium units, and four levels of retail space. Located on the site of the former Chicago Sun-Times, Trump International Hotel & Tower, Chicago has the best location in Chicago, and has been named the “#1 Hottest Hotel in North America” by Condé Nast Traveler and “#1 Hotel in North America & Canada” by Travel + Leisure Magazine.

In March 2006, Donald J. Trump announced plans to design and build a massive golf development on 1,400 acres of sand dunes on the northeast coast of Scotland. After many controversial years of planning, hearings and a public inquiry, a spectacular links course among the Great Dunes of Scotland was finally completed. On July 10, 2012, Trump International Golf Links in Aberdeen, opened to rave reviews. Designed by world renowned golf course architect Martin Hawtree, the dramatic landscape and panoramic views have golfers and press worldwide calling it one of the greatest links courses ever built. It is already a must play destination for international golfers and would be a prime location for a major championship.

Mr. Trump is also responsible for all of the commercial leasing for the Trump Organization which includes properties such as Trump Tower on Fifth Avenue and 40 Wall Street in downtown Manhattan.

In addition to his real estate interests, Donald Jr. is an accomplished and sought after speaker. He has spoken extensively throughout the United States, and has given keynote speeches internationally, notably in Dubai and India. He was also featured as an advisor on the highly acclaimed NBC shows “The Apprentice” and the “The Celebrity Apprentice.”

Donald Jr. received his Bachelor’s degree in Finance and Real Estate from the Wharton School of Finance at the University of Pennsylvania.

When he is not working, Donald Jr. enjoys being an avid outdoorsman as well as a devoted father to his five wonderful children.