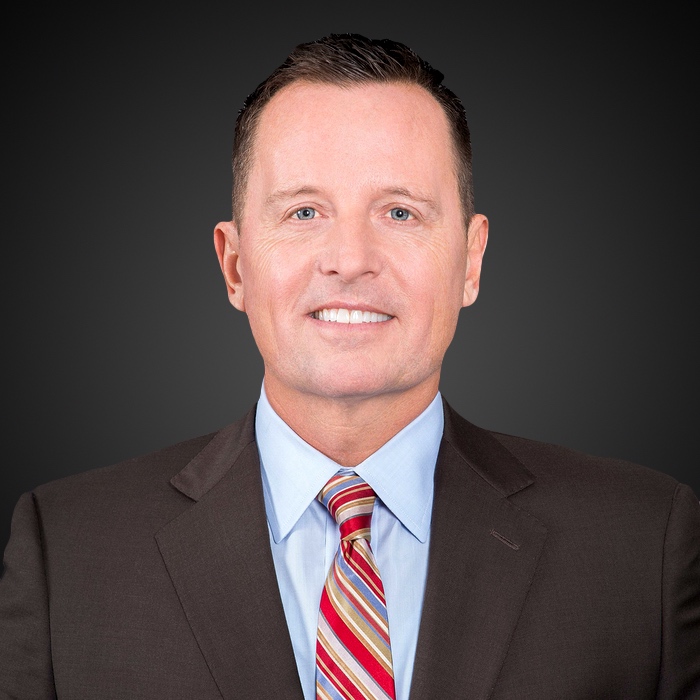 Richard A. Grenell arrived in Germany on May 8, 2018 and presented his credentials to President Frank-Walter Steinmeier the same day.

Grenell was a Partner with Los Angeles-based Capitol Media Partners. He has served as a senior policy and communications advisor for public officials at the local, state, federal and international levels, as well as for a Fortune 300 ranked company.

Grenell is the longest serving U.S. spokesman and political appointee at the UN in history having served from 2001-2008. In 2012, Grenell briefly served as Presidential Candidate Mitt Romney’s National Security and Foreign Affairs Spokesman. His appointment made him the first openly gay spokesman for a Republican Presidential candidate. In 2001, he was appointed by President George W. Bush to serve as Director of Communications and Public Diplomacy for the United States Ambassador to the United Nations and advised four U.S. Ambassadors – John D. Negroponte, John C. Danforth, John R. Bolton and Zalmay Khalilzad in the eight years at the UN. Grenell was also appointed in 2004 as an Alternate Representative to the UN Security Council with full voting rights and privileges.

Grenell served as the United States Spokesman during the world body’s most turbulent time. He led communications strategies on issues such as the war on terrorism, peacekeeping operations, the conflict in the Middle East, nuclear proliferation, Israel’s security and the UN’s Oil for Food Corruption investigation, to name a few.

Prior to his tenure at the UN, Grenell served as a spokesman for New York Governor George Pataki’s Administration, San Diego Mayor Susan Golding, Congressman Mark Sanford and Congressman Dave Camp, former Chairman of the House Ways and Means Committee. Grenell has also served as the spokesman for many state and federal political candidates including three U.S. Presidential campaigns.

Grenell has written for the Wall Street Journal, Los Angeles Times, CBSNews, CNN and the Washington Times. Grenell’s twitter feed was hailed by Time Magazine as one of the Top 10 Political sites in 2014.

Grenell taught at The University of Southern California’s Annenberg School of Communications and was an Advisory Board Member of Newsmax Media. He also previously served on the Langley Intelligence Group Advisory Board.